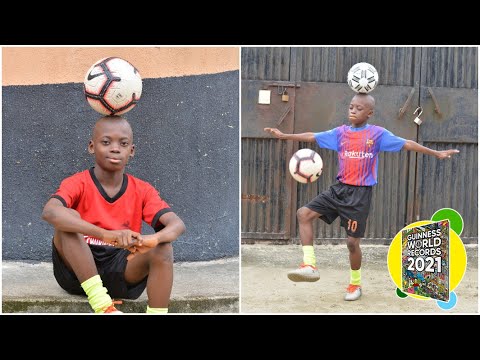 He did it! Eche Chinonso a.k.a “Amazing Kid Eche” from Delta State, has successfully broken the Guinness World Record for the most consecutive football (soccer).

111 impressive touches in one minute while balancing a football on the head, that’s what it took Eche to break the current record, earning himself a spot in the Guinness World Records book.

According to the Guinness World Records:

Eche’s favourite trick to perform still involves juggling a ball while balancing another one on his head, in the knowledge that he still remains the very best in the world at doing so.

He has his sights set on quite a few more Guinness World Records titles in future, we can’t wait to see more from him.

Eche Chinonso a.k.a “Amazing Kid Eche” from Delta State, Nigeria, has broken the @guinnessworldrecords for most consecutive football (soccer) touches in one minute while balancing a football on the head with 111 touches! #UpNigeria #BellaNaija BellaNaija.com