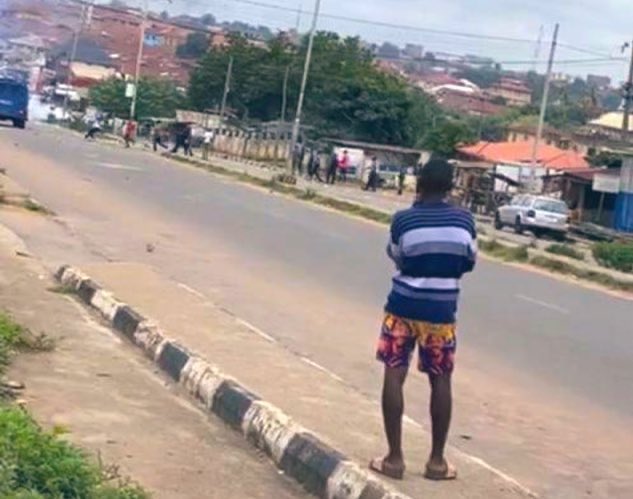 The last known photos of Jimoh Isiaq of Ogiri Compound, Ita Alasa, Ogbomoso, show him standing in shorts and a sweatshirt, palm slippers, watching #EndSARS protesters from a distance. We see him from the back in both photos and the pensiveness is consistent, him contemplating: his arms clutched to his sides in one, and in the other, you surmise, there’s his right arm across his torso, holding up his left, chin resting on his fist.

The next photo you see of Jimoh, alive, the pensiveness is gone. You’re seeing him from the front now, and something is obviously wrong. He’s no longer standing. He’s held up by a couple of people and his eyes are shut, arms flailed, sweatshirt up to his chest. And then another picture comes up and you see the problem: his torso, bloody. He’s been shot.

It is not long after, according to Guardian, that Jimoh was rushed to the Bowen University Teaching Hospital, where he died. And then you see photos and videos of his body swaddled in white sheets, the body lowered into the ground.

All of this in a few hours.

All Jimoh did was stand and watch a protest in house clothes. He did not even join the protesters to demand an end to police brutality. He was unarmed.

Young Nigerians have taken to the streets in droves to ask the government to scrap the Special Anti-Robbery Squad (SARS), a squad that’s known for kidnapping, assaulting and murdering innocent young Nigerians. A scroll through the #EndSARS trend on Twitter will show you countless stories, all of them harrowing. There are so many names. And now, right in the midst of the protests, Jimoh Isiaq’s has been added.

We cannot let Jomoh’s death be in vain. It isn’t too much to ask that Jimoh’s killer be brought to book. That every officer involved in his death be fired, arrested, taken to court and punished. This thing the Nigerian police is doing, killing citizens, it has to end. Why are they killing us? Why did they kill Jimoh? Why?

There’s a video circulating on social media showing an older man weeping, people around him trying to console him. They say this is Jimoh’s father. This is the second video we’re watching in a few days of a father mourning his son, a son he lost to the Nigerian police. The Nigerian police that’s meant to protect us. Things can’t continue like this. Parents do not deserve to mourn their children.

Jimoh Isiaq’s death cannot and should not be in vain!!! Nigerian Youths, we must see this through for him and all others that have lost their lives as a result of police brutality!!! It just may be me or you next!!! #EndSARS #EndSarsNow

Jimoh Isiaq was murdered in cold blood by those who swore to protect his life and property. How long are we going to continue this way?!! Why does the lives of young people mean so little to our elected leaders?!!! We demand an end to this!! #EndSARS #EndPoliceBrutality

Jimoh Isiaq.
Today he woke up.
Today he went out to protest.
Today he was shot by policemen. Today he died.
Today, he has been buried.
Jimoh Isiaq.
A hero. And his death will not be in vain. #EndSARS #FuckThePolice

You never know how a protest will end. Thank you all for your bravery. Rest In Peace Jimoh Isiaq 🕊 #EndSarsNow

By now, @MBuhari should’ve sacked the IGP & suspended the Oyo State CP. The policeman who pulled the trigger on Jimoh Isiaq should’ve been arrested & detained.

If these three happened, I bet no policeman will shoot an #EndSARS proteser tomorrow.