On Awkuzu Cell, Okadas as Presidential Youth Empowerment Schemes & Turning a Protest into a Carnival

I’ve been spending some time on Twitter lately, lending my voice to the #EndSARS movement and reading the most horrific stories. One of those stories is of the Awkuzu cell and James Nwafor, the now sacked aide of Governor Obiano of Anambra state. Chijioke Eruchalu‘s story is one of the many horror stories I read about Awkuzu prison. 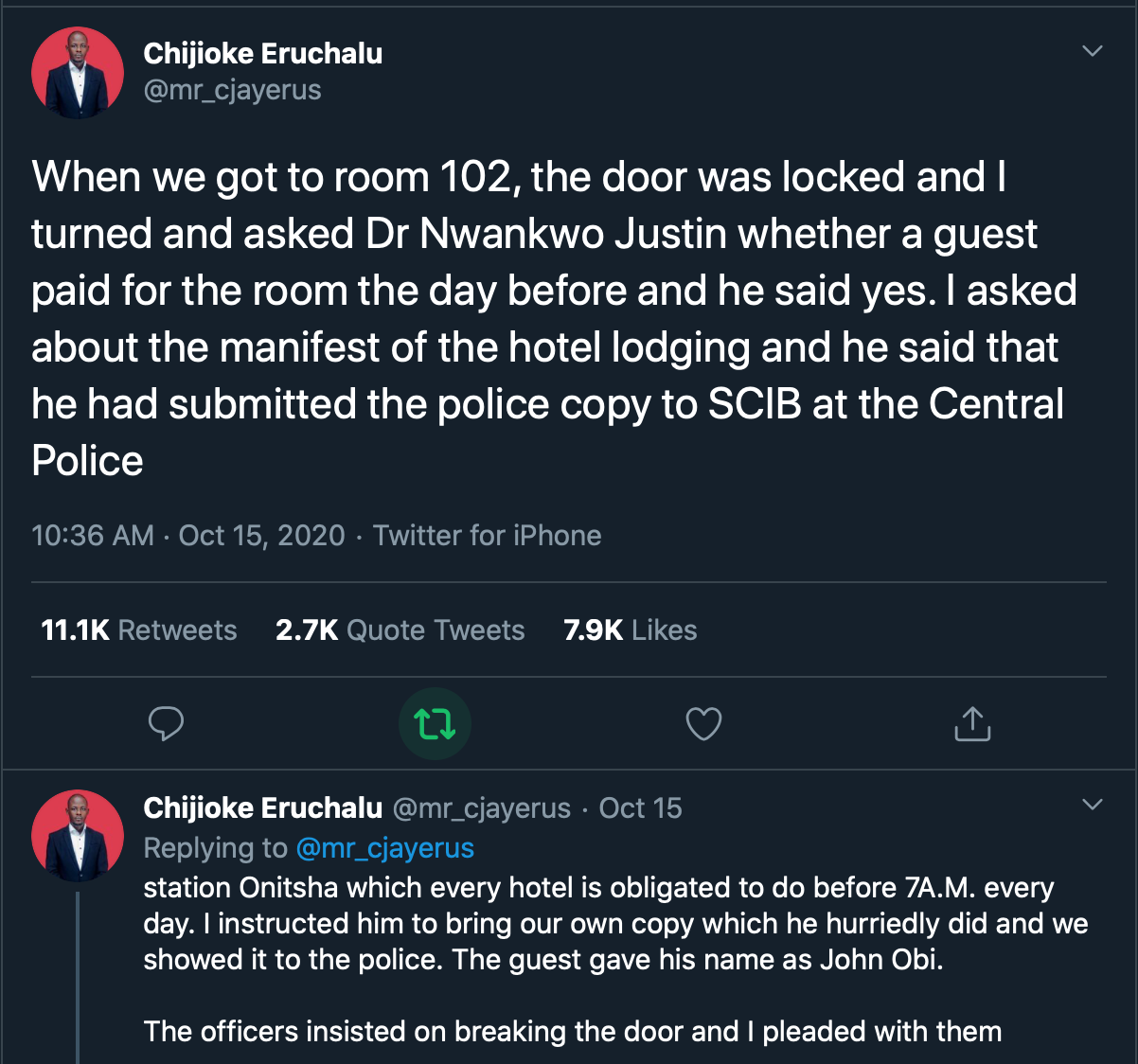 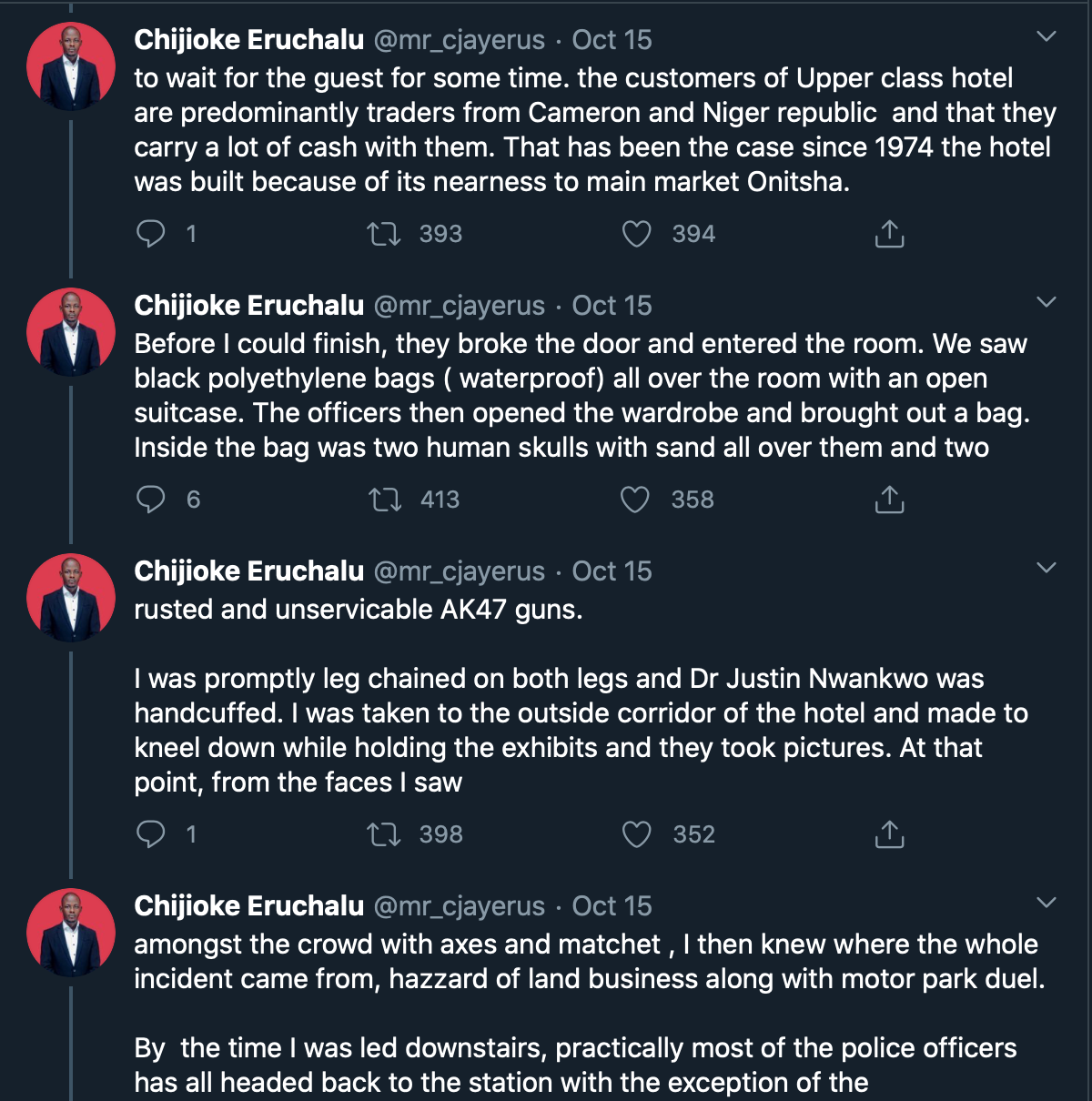 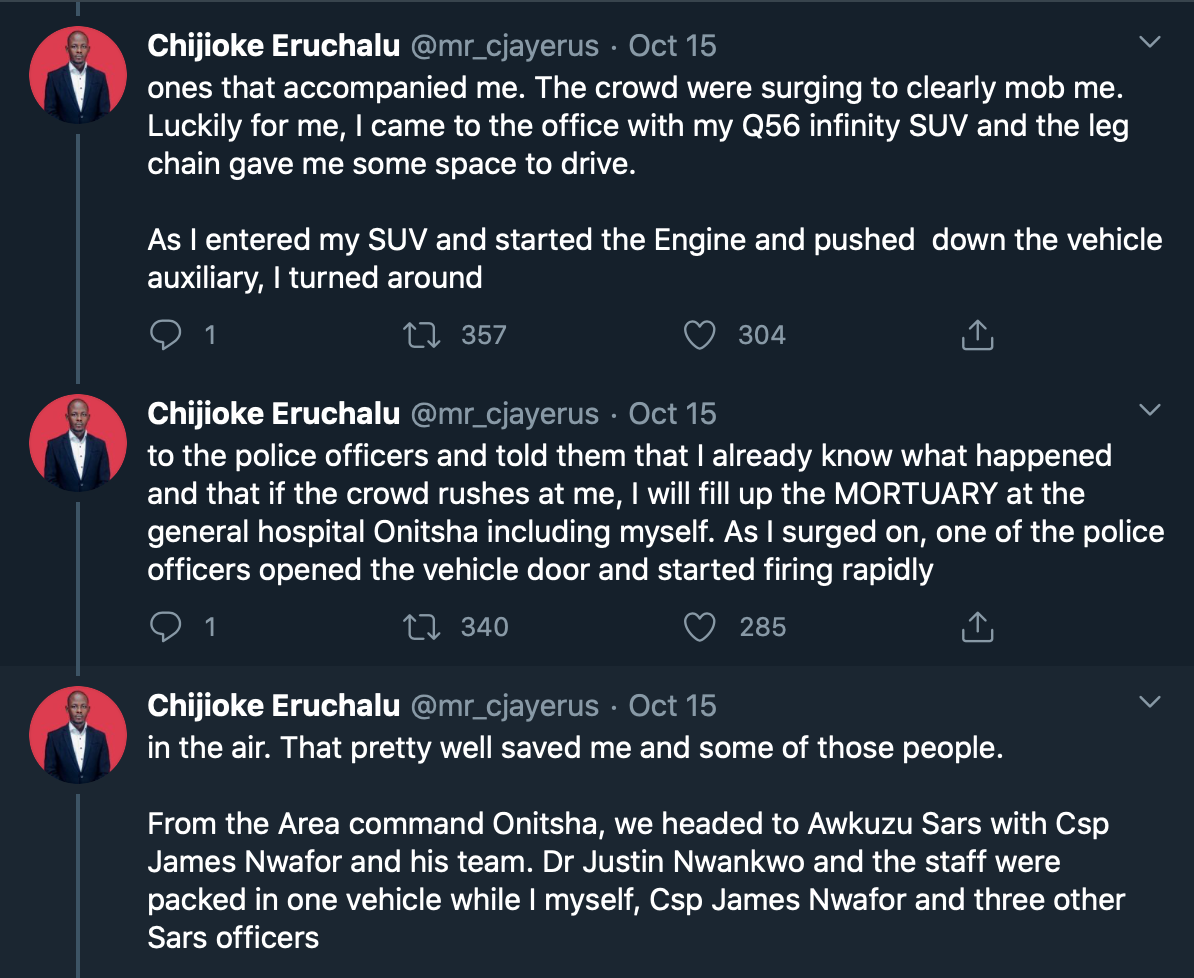 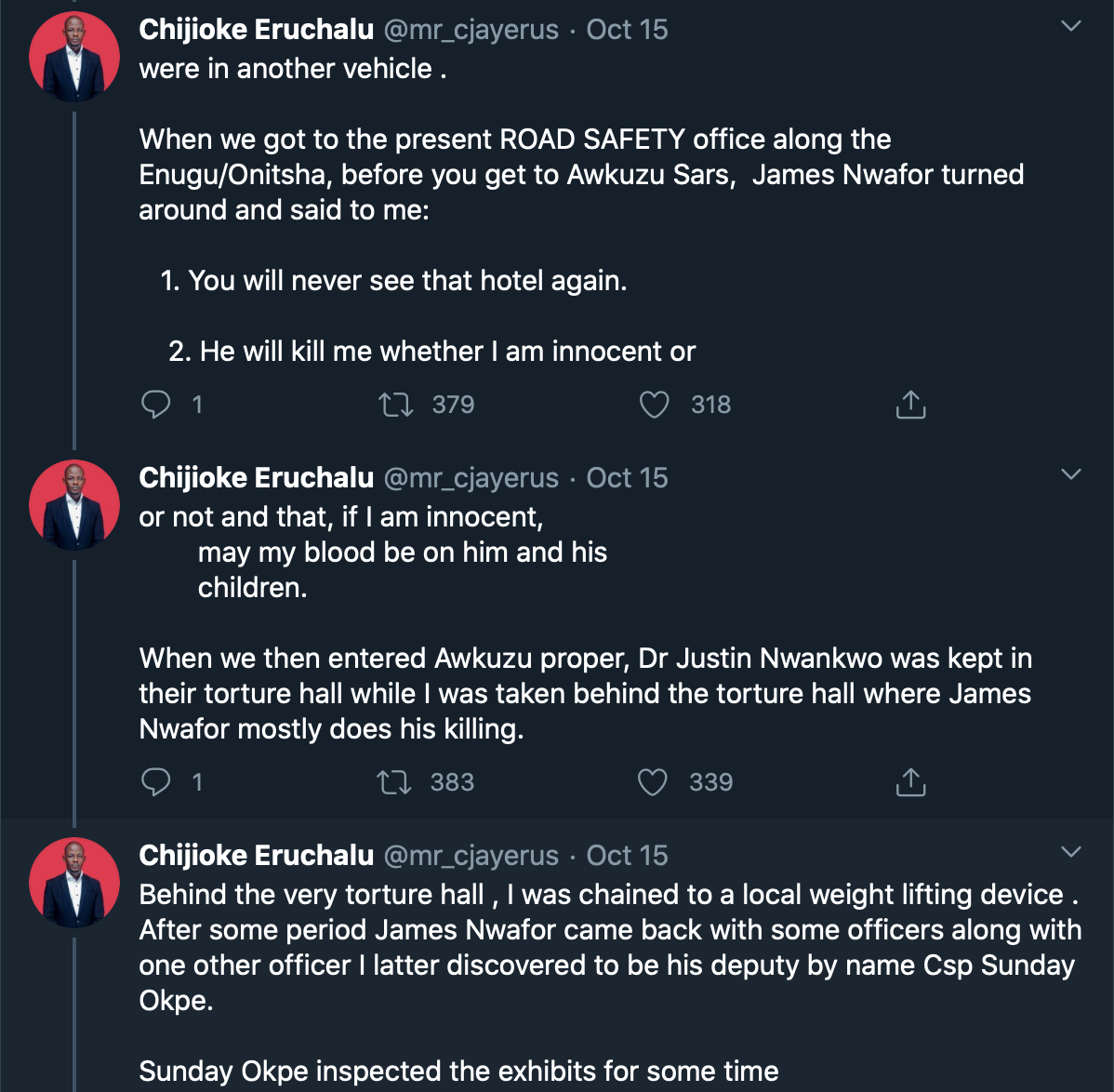 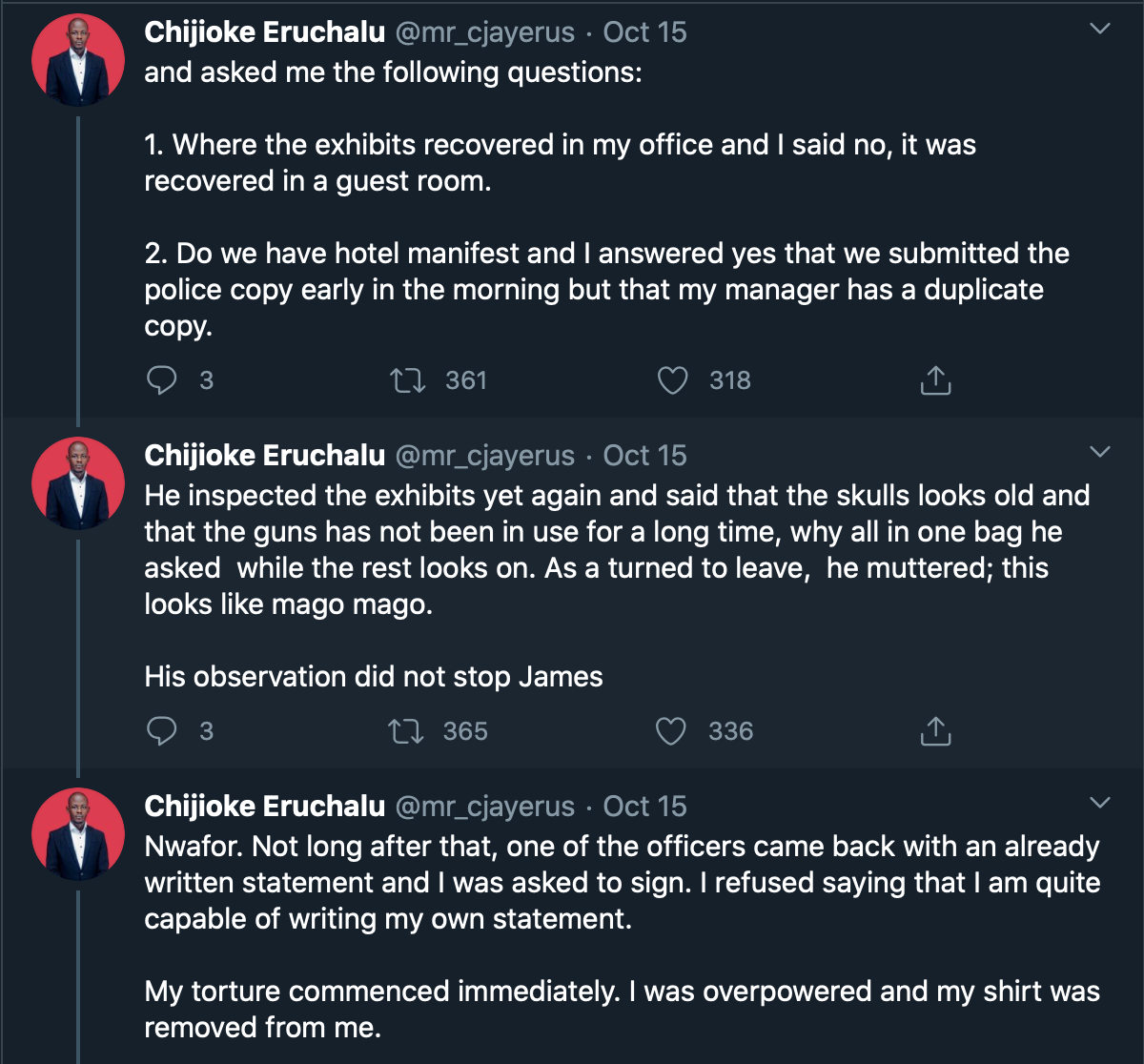 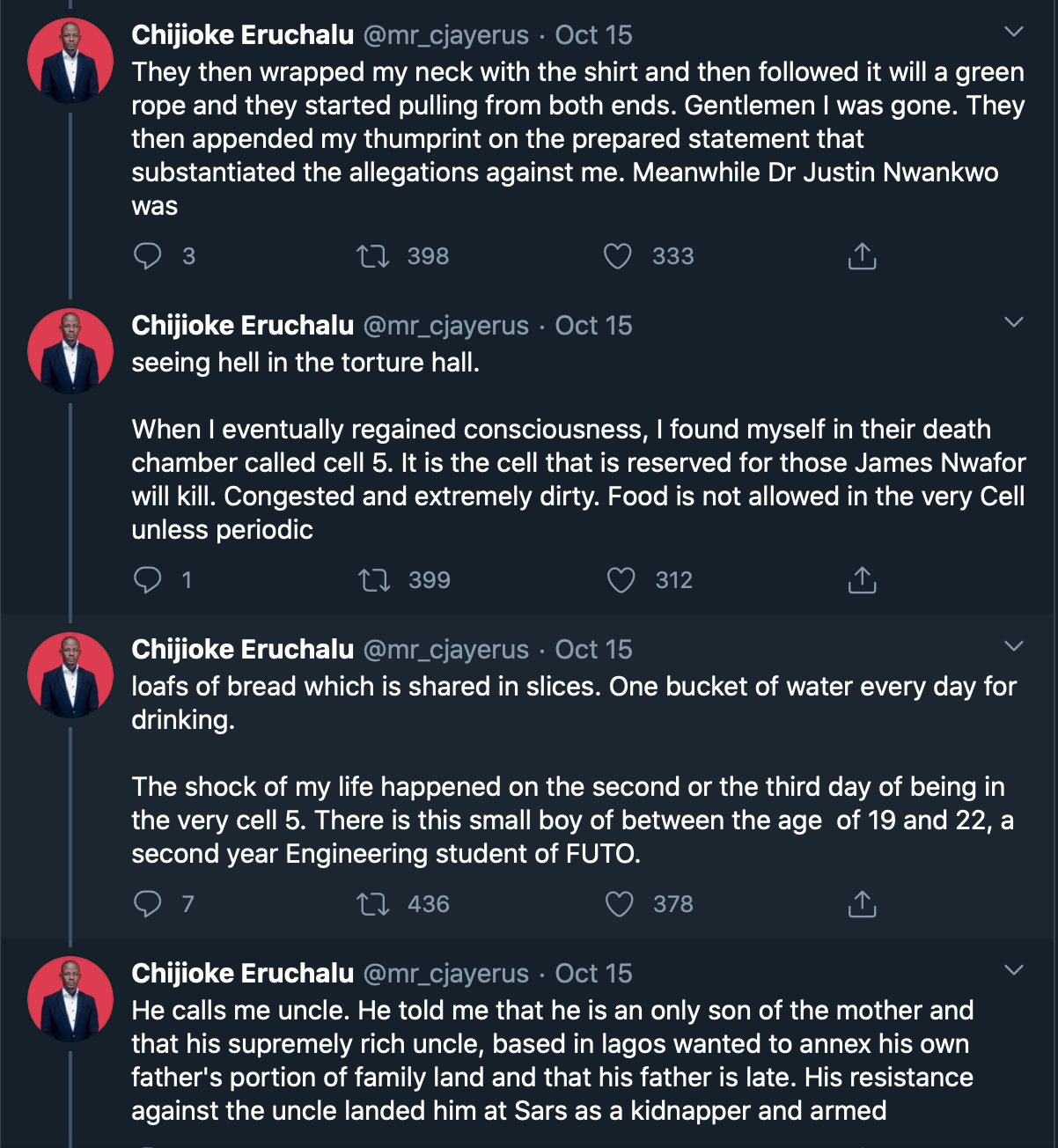 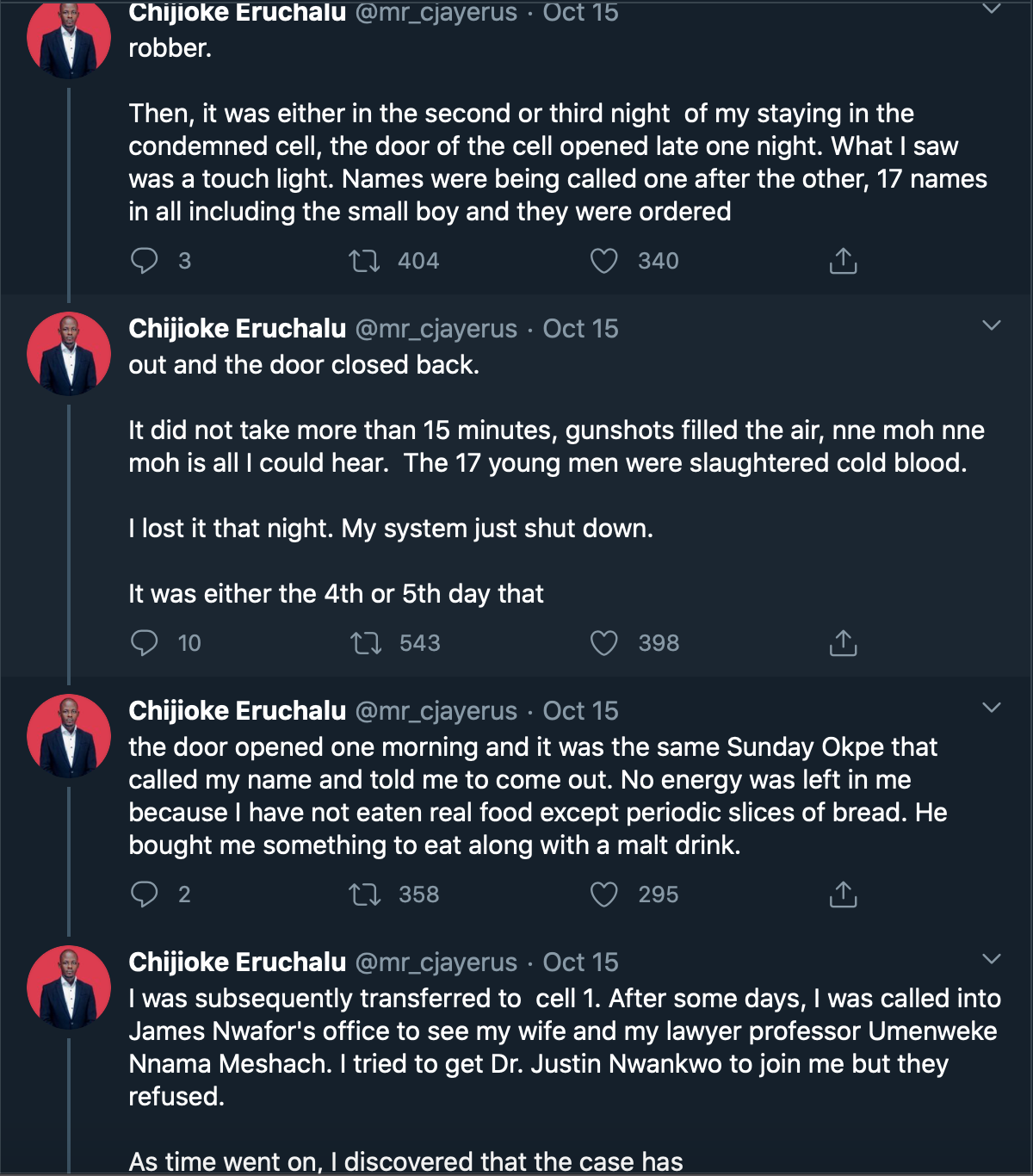 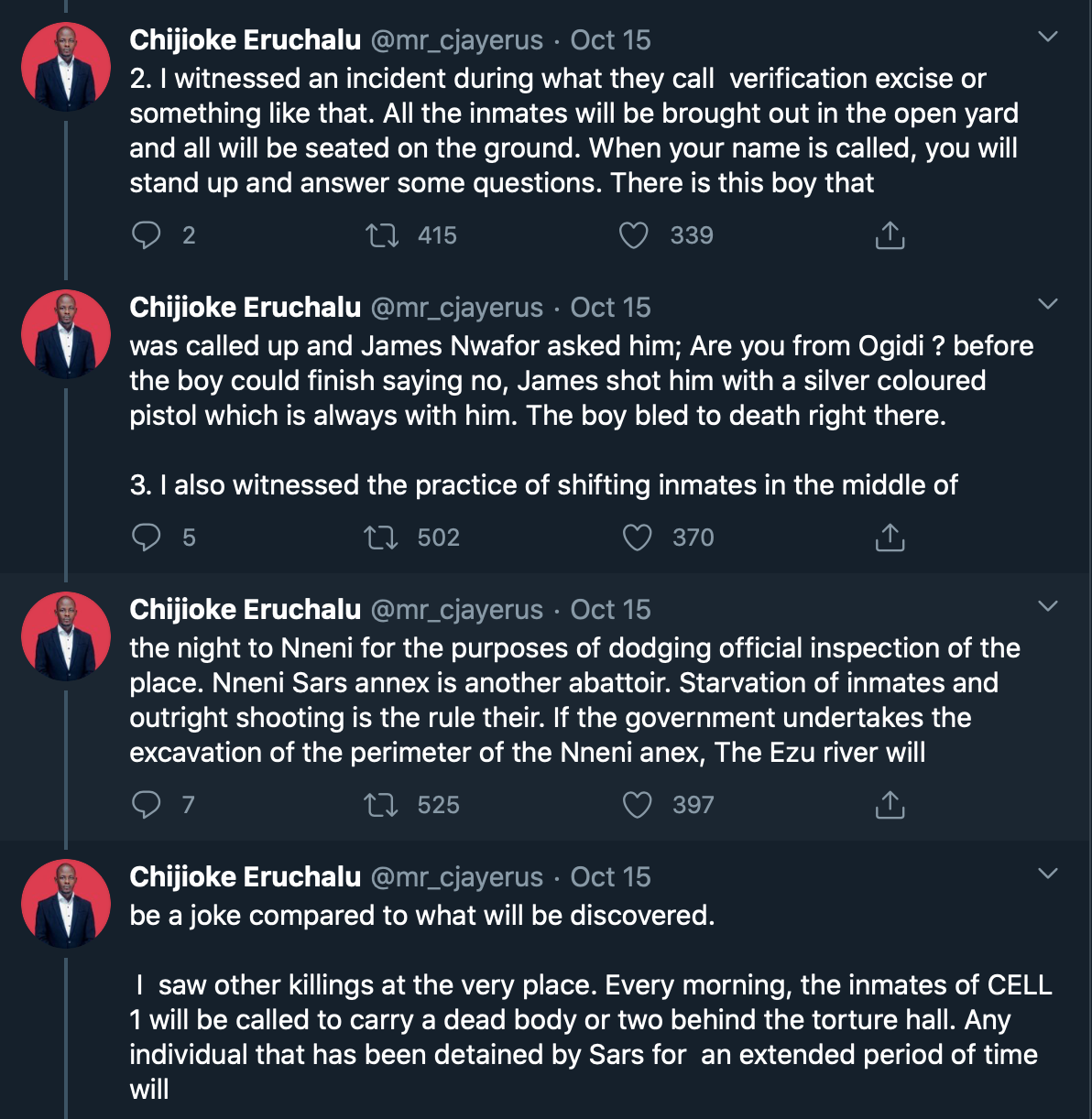 Chijioke is not the only one who has something to say about James Nwafor.

CSP James Nwafor is the former OC SARS that killed & dumped over 100 dead bodies of youths in Ezu river, Anambra.

He also killed Chijioke and made his father swim a river filled with dead bodies in search of his son’s body. He must be prosecuted!

A retired CSP of police from my State (Ebonyi) who used to be OC SARS Awkuzu in Anambra State, one of the most vicious men ever to work for the Nigerian police. He was reputed to have started sell of human parts during his stint in Awkuzu

CSP James Nwafor rendered a woman childless in 1 night. Arrested 3 brothers who were on their way to Neni & killed them.

CSP James Nwafor was also renown for selling human parts at SARS Awkuzu. Most of the assassinations that occurred from 2015-2020 in Anambra was done by him.

Apparently, James has been a terror in Anambra state, and the SARS officials at Awkuzu are known to be brutal and inhumane.

But they are not the only ones, there’s also one Aniete Eyo.

A lot of petitions have been written against him but he has a top dawg close to the IG who always cover up for him,he always says “he can’t be fired from the police force”.The highest that happened back then was his transfer for B Division Warri to C Division Asaba

There are many other SARS officers who, according to people on Twitter, serial-kill citizens just for the fun of it.

As I read through people’s stories, I realised there’s a similar force that drives these SARS officers: power. They have so much unchecked power that they have become gods. In a society where power cannot be checked or curtailed, tyranny reigns. This doesn’t apply to just SARS officers, it applies to everyone. When people cannot stand up to you, when there’s no one to check your excesses, you begin to feel immortal.

People like James Nwafor and his goons are not killing people for fun just because they are wicked, they are also doing this because the system has enabled them to. The Nigerian system has given them so much, too much power, that their fellow humans have become ants to them.

James Nwafor, before his dismissal, was Governor Obiano’s Senior Special Assistant on Security. Before this position, he was a former officer-in-charge of the Special Anti-Robbery Squad. Through the years, the stories of his atrocities have trailed him. Still, through the years, he has risen in rank – to the level of working closely with the governor.

Now, whether or not Governor Obiano knew about his atrocities, things still does not look good. If the governor knew, then it means he endorsed the indiscriminate killing of his people. If he did not know, then it means the governor is irresponsible, because a simple background check would have brought his sins to light many years ago. It shouldn’t have taken a nation-wide protest to inform the governor that his aide is a serial killer.

From the senators to governors, the president, gun-wielding policemen—in short, every one of us in the society, we should only have the kind of power that can be taken from us when we misuse it. There’s so much impunity in Nigeria because people in power are above the law. Take that power away from them and watch them sit up. The system that allows a policeman ‘waste’ a citizen is the same system that allows a snake to swallow ₦36 million. Everyone is doing anyhow because there are no checks and balances. Police stations have dungeons where they dump dead bodies—why? There’s a river with floating dead bodies and no one has bothered, through the years, to look into this—why?

Congratulations have been pouring in for fintech company, Paystack, after Silicon Valley payments firm, Stripe, acquired it for $200 million. This news, coming out of Nigeria is a major boost to our reputation. That same week, on the 12th of October, the President launched and showcased the Presidential Youth Empowerment Scheme (P-YES) tools at the State House, Abuja. 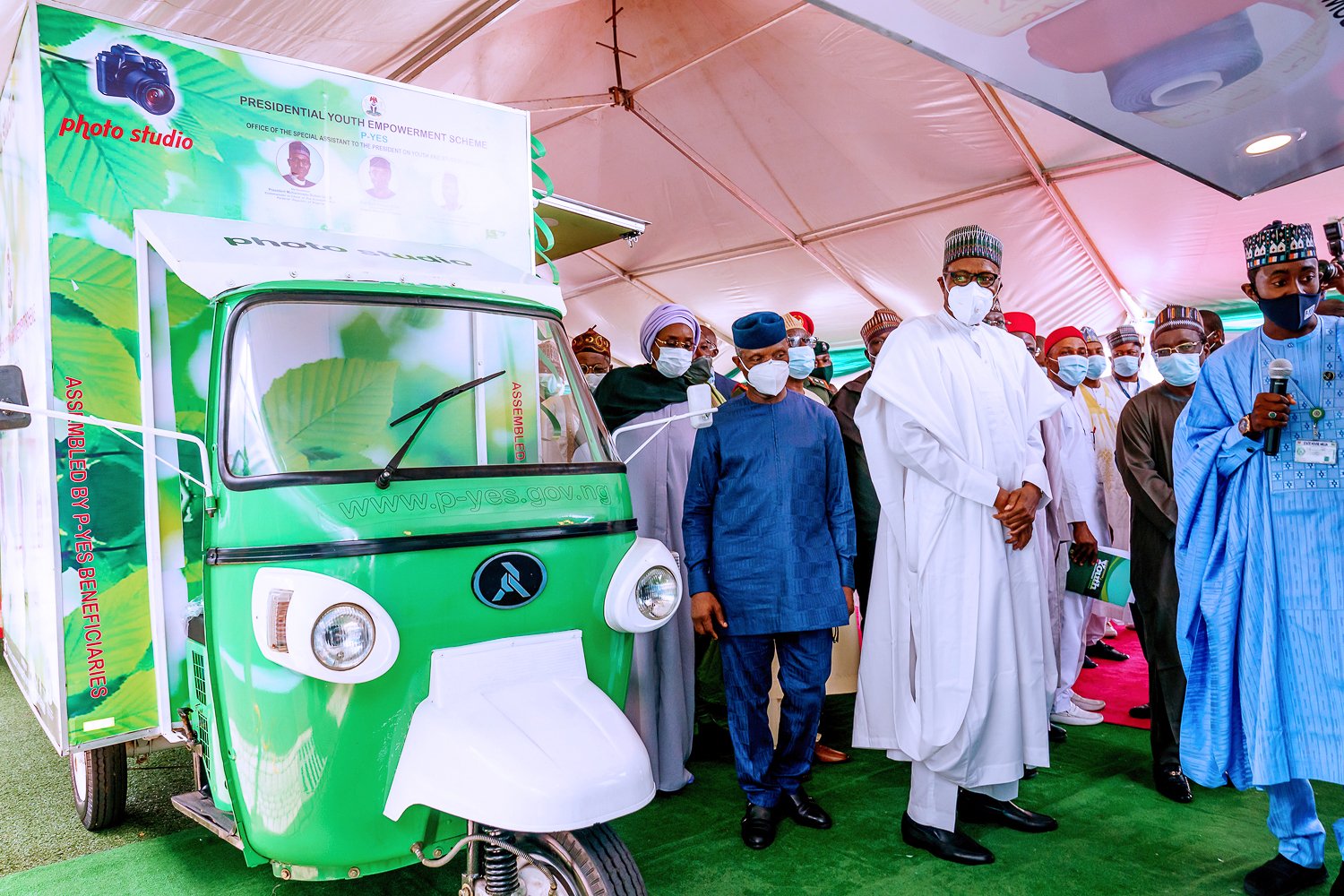 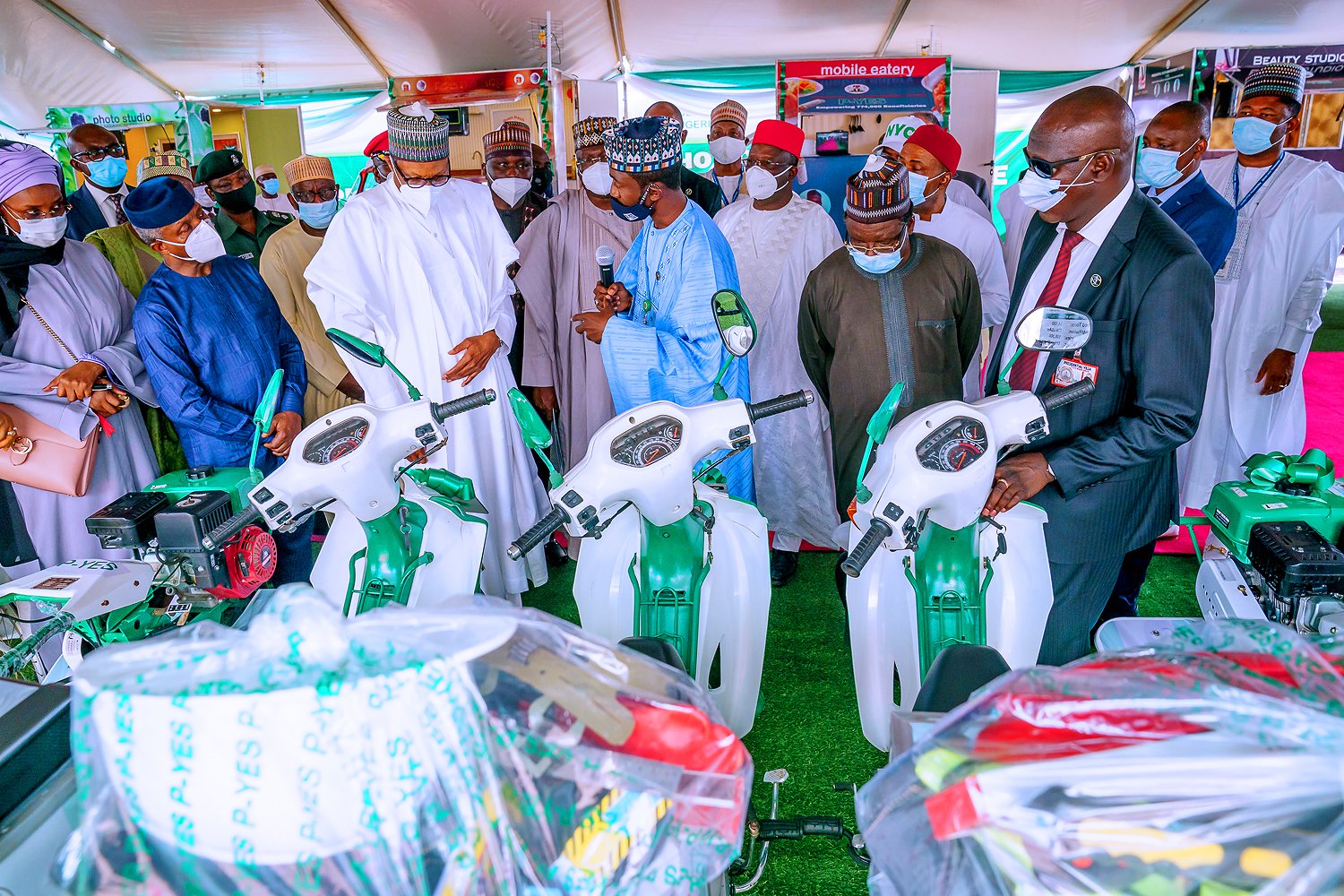 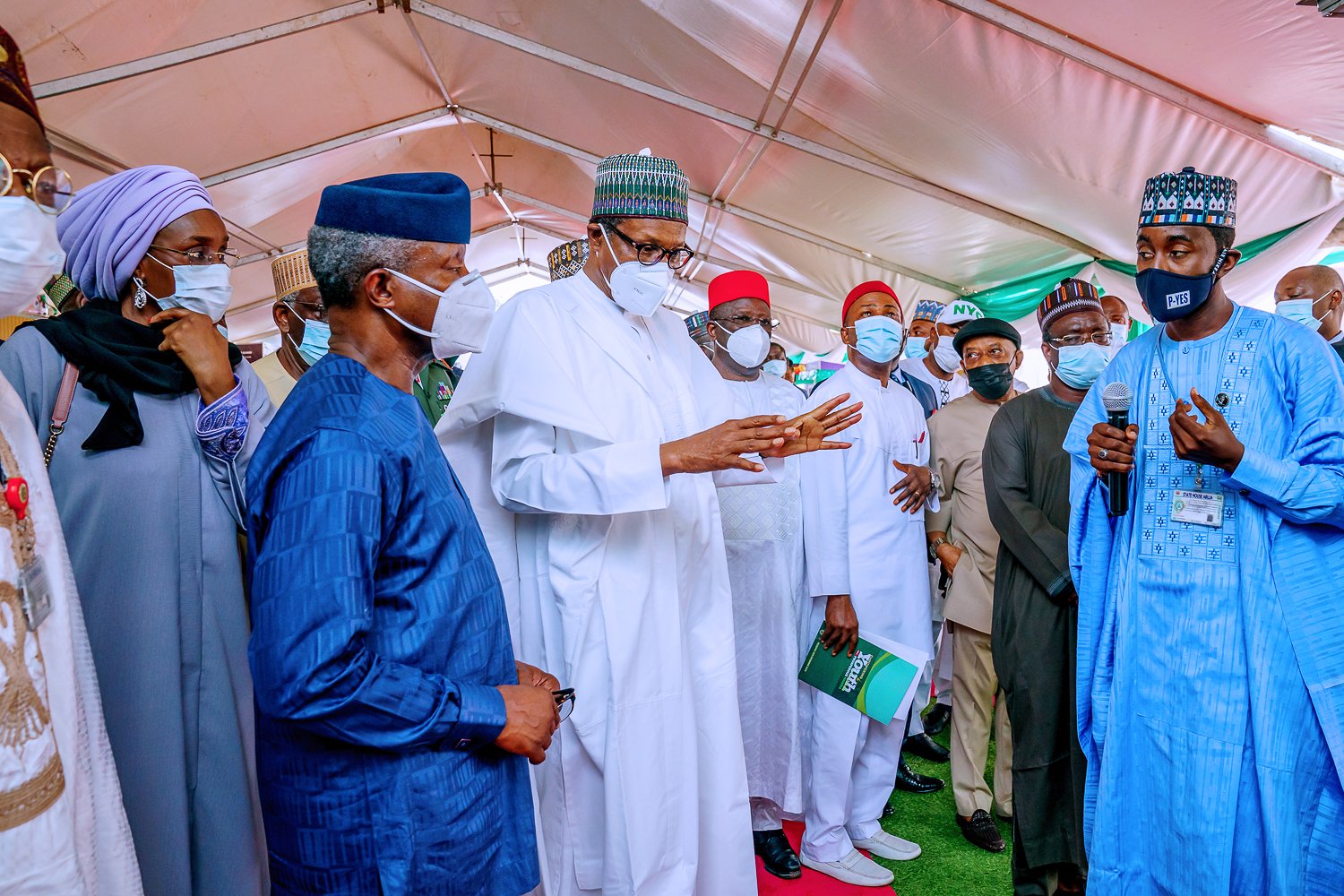 These ’empowerment tools’ were Keke Napep, okada, shawarma grill, groundnut oil, and so on. While it’s great that the federal government is making efforts to empower the youths, I can’t help but notice the huge disparity between securing a $200 million deal and being empowered with ororo.

There are many sectors where the Nigerian government can empower its youth: arts and culture, science and tech, education, sports, tourism… just name it. Keke Napep is good to an extent, but how can youths who drive Keke compete on a global scale?

Every single time I have seen ‘youth empowerment initiative’ by the government, it will either be okadas, sewing machines, buckets, brooms, wheelbarrows, hoes, or cutlasses. In 2020! The inability of the government to see beyond this is another reason why they assume that everyone pressing laptop must be doing yahoo. They can’t just fathom how young people can be making millions of naira just by ‘pressing their laptops.’

These days, I have been enjoying Lagos traffic because I am in full support of the #EndSARS protests. But it seems a lot of people don’t know why they’re protesting. Guys, it is a protest, not a meet-n-greet session, not a carnival. It’s really irritating when people only come out to jolly, play snooker, and have fun. People have died for this, some people are in the hospital for this, some people are traumatized because of this. We can’t turn this into a joke. Today, the whole of Ikorodu was blocked, people were drinking and smoking, and there was no single #EndSARS banner. I escaped that just to see the same in Ojota. Roads were blocked, vehicles were not allowed to pass, yet the people were just drinking, smoking, making friends, and laughing around. No chant of #EndSARS, no banner in sight. I eventually had to turn back. We can’t stop people from moving around if we know we’re not serious about this. If you’re turning up for the protests, go big or go home. Las las, I hope everything turns out well for us. I really want us to win this.

The post On Awkuzu Cell, Okadas as Presidential Youth Empowerment Schemes & Turning a Protest into a Carnival appeared first on BellaNaija – Showcasing Africa to the world. Read today!.