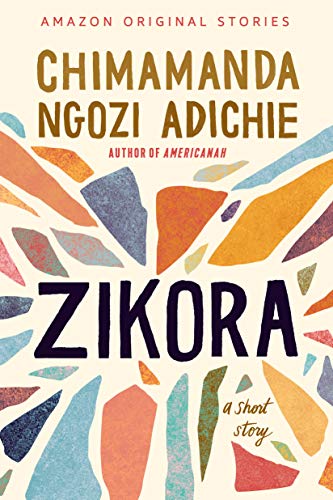 Chimamanda’s newest short story, Zikora, opens you up a plethora of emotions. If you are familiar with her work, you expect nothing less. Still, it leaves you captivated.

This sensational story opens with a cold and unfriendly mother in the hospital and her daughter who is in labour. The reader is launched headfirst into the hospital room with a mom-to-be who is going through birth pangs for the first time in her entire thirty-nine years of living. She was familiar with getting pregnant, but this other side of pregnancy – labour – is a rude shock to her. “Nature must not want humans to reproduce,” she mutters.

Chimamanda’s powerful use of imagery grips the reader and entwines you into every contraction and discomfort the narrator describes, and the excruciating pains that bring Zikora to the brink of delirium as she starts to get upset at the nurses and doctors. First, it was the smaller nurse whose crime was her false lashes; then Dr. K who she had chosen for his compassionate eyes but his normalization of her pain, which should be biologically impossible for him to understand, made her second-guess her choice; and then the epidural doctor who, to her, doesn’t sound professional enough.

The transition through time in the story is not confusing; it is, instead, enlightening. Not so long ago, she was in a perfect relationship with a loving man, Kwame, who was a huge contrast to the man her cousin, Mmiliaku, had chosen as a husband. It’s surprising to the narrator and the readers how Kwame abandons her with the pregnancy. We are willful spectators to a blissful relationship that suddenly turns sour. And then while our narrator struggles to pull through nine months alone, she also tries to rationalize why the father of the child just bolted and left. But our narrator never judges him so we are left to be the jury.

We begin to wonder if she wrote and played a different script in her head from the beginning. Her expectations when she tells him about the pregnancy suggests she was so certain he would be welcoming of the idea. His claims of miscommunication cannot be thrown out the window too. When Mmiliaku tells her how possible it was for men not to have an idea about the workings of the female body, the narrator steps back in thoughts and gauges Kwame’s reaction to her getting off the pill and other statements she had made concerning the female body. We can sense a misunderstanding there. Did he assume she had an alternative for the pill? For a couple that talked about everything, it seemed absurd that they did not discuss this. Could she have already taken a decision for both of them the moment she decided to get off the pill? Could that have motivated his action to leave her?

Now, at the jury box, do we try to rationalise his decision, or do we condemn him for insensitivity? Whatever we choose, it cannot be overflogged that he may have overdone it when he ignores her calls from the hospital and blocks her.

Blocking her off his life would definitely not undo a baby, but that piques our interest in an assertion the narrator had of him: he had a boyish quality which she did not think was a cover for immaturity. With all that unfolds, you are left wondering if really it wasn’t just a cover for immaturity? A single point of view has its restrictions.

Her mother, who we may see as stiff, has been through her own fair share in life and understands what it is to hold your head high and strong as a woman and show no pain whatsoever. This, she expected from her daughter. After having her daughter, she suffered 3 miscarriages and an emergency hysterectomy, her husband decided to marry another wife to bear him sons and yet she bore all that with dignity and grace, and only when he decided to move out from the house did her daughter get a glimpse of her armor.

When we meet her father, she describes him as someone who “charmed everyone, and broke things and walked on the shards without knowing he had broken things”. It says a lot about who her father was, in comparison to her mother, and how his actions may not always have been well thought out as regards her feelings, but for the strains of culture, it may seem superfluous to blame him for remarrying or even blame him for moving out to set her half-brother straight.

In the end, the liberal narrator is able to see that whereas her father broke things, she blamed her mother for the ruins. I believe at this point, we can say she begins to understand her mother.

This road to motherhood with Zikora did well to portray the diversity of human emotions, with no set way for human reaction. We see that not all mothers would be doting on their daughters in labour because “it’s normal”. Not all nice, loving, and exceptional boyfriends with family acquaintance will stick around when a baby comes, and not all mothers are in awe at the birth of their child. Zikora is seen to not know how to feel, she could articulate the feeling of pain from the stitching of her tear more than that feeling of awe when she held her baby in her arms. It was not until he cried from the pain of circumcision did that feeling of possessiveness overcome her, and the love flowed in torrents that she needed to affirm it loudly that he was hers.

Zikora had an eventful road to motherhood and even though she is inexperienced and feels a longing for the father of her child, she is about to explore two other relationships that will change her in different ways: a relationship with her mother with whom she has found a new dependency to help with the child, and her own child through whom she has seen a softer side of the mother. The story which first began with a cold mother ends with two mothers overcome with different emotions.

The post Uzezi Agboge: Why Chimamanda Ngozi Adichie’s “Zikora” is a Must Read appeared first on BellaNaija – Showcasing Africa to the world. Read today!.