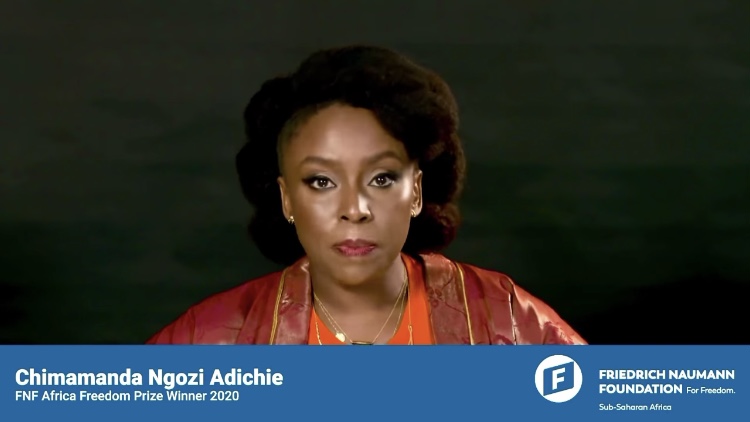 Author Chimamanda Ngozi Adichie was recently awarded the “Africa Freedom Prize for 2020” by the Friedrich Naumann Foundation for Freedom (FNF).

The award was presented digitally on 14 December 2020 and Chimamanda’s acceptance speech took a deep dive into gender-based violence, how the male and female children are treated differently, even from birth and constructing a new masculinity. She said,

We say gender-based violence, but violence by whom? Yes, there are cases where women attack women and men attack men. But we must be forthright in addressing this ugly epidemic that it is overwhelmingly women who suffer violence from men. So here’s the United Nation’s statistics, 137 women are killed by a member of their family every day. What it doesn’t say is that it is nearly always a male family member.

We know from research… that a baby girl and a baby boy are treated differently from the minute they are born. In fact even before they are born. It is overwhelmingly female pregnancies that are mostly terminated specifically because they are female. And studies show us that as infants, across cultures all over the world, girls get more hugs and more comforting while boys are expected to cry less and are comforted less. As toodlers, we already expect boys to be tough and to suck it up and not to cry. So we start very early in our project of constructing the hard cage of masculinity.

Watch the full speech below: