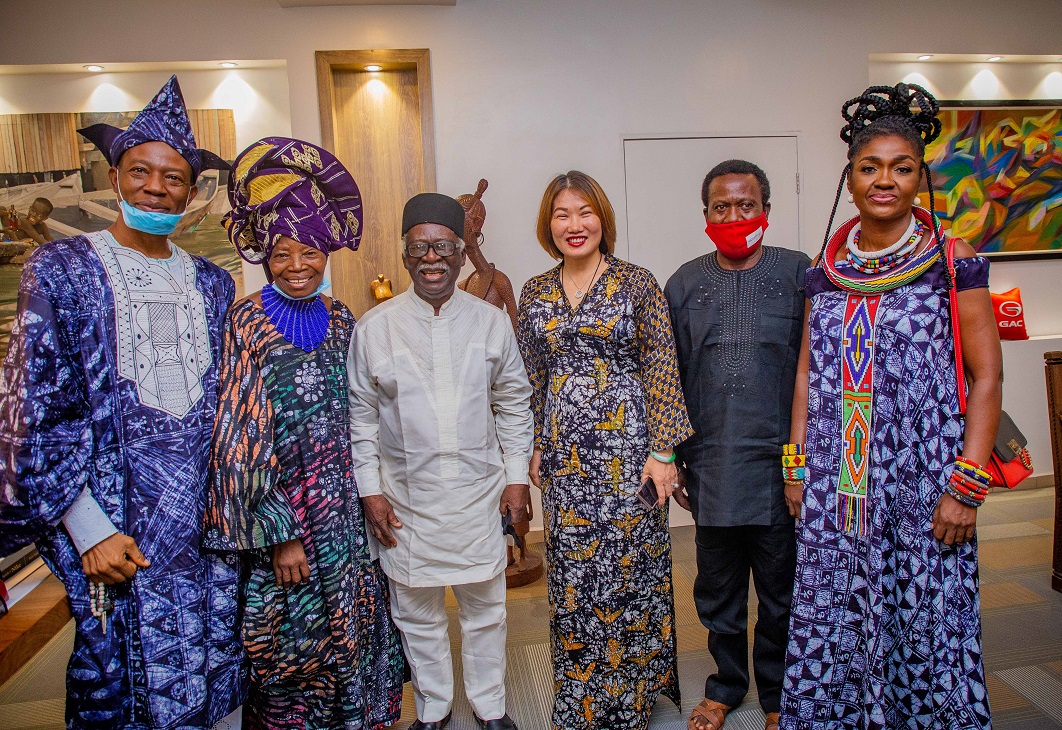 Chief   Nike   Davies-Okundaye, Nigeria’s   Textile   Queen and internationally renowned artist, is, for the first time in History, sharing all her business and crafts industry insights, in a Biography authored by Kofo Adeleke,  with a foreword written by former US Ambassador to Nigeria, Dr Robin Renee  Sanders. The memoir details Mama Nike’s arduous and historic journey on rising to fame, from the walls of Ogidi-Ijumu, a small village in western Nigeria with no formal education to conquering the globe, as written by Kofo Adeleke. 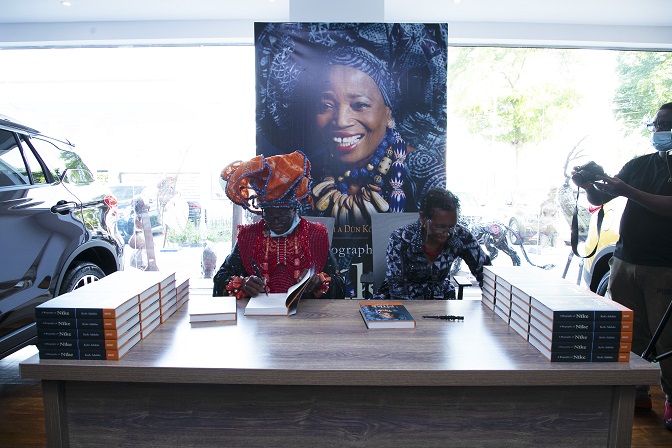 Launched officially by Chief Diana Chen, the Chairman of CIG Motors, “Bata Mi  A Dun Ko ko Ka” was historically unveiled in hardcover on Saturday, December  19, at the CIG Motors Headquarters on Ligali Ayorinde, Victoria Island, Lagos;  in a cozy setting, witnessed by the creme de la creme of the art Industry including Essayist and Novelist – Nobel laureate Professor Wole Soyinka, The CEO of the Nigerian Stock exchange- Oscar Onyema, amongst other Royal Dignitaries. Education is important in life. The memoir’s title, in the form of a Yorùbá proverb, echoes a major part of Nike’s work, rooted in powerful elements of Yorùbá culture and mythology. In 233 pages, the reader learns how art shaped her life and influenced her art in diverse ways. From joining a traveling theatre group to becoming an adept student, drawing from her family’s many artisanal specializations, Nike Davies, aka Nike Twins Seven Seven is a woman who has lived lifetimes filled with stories all narrated in this memoir.

Professor   Wole   Soyinka-Nobel   Laureate,   a   friend of  Mama Nike also commended the artist, he said: “Today is all about my aburo, it’s always a  delight to see her, the embodiment of “Gbogbo nishe” – a multifaceted individual. 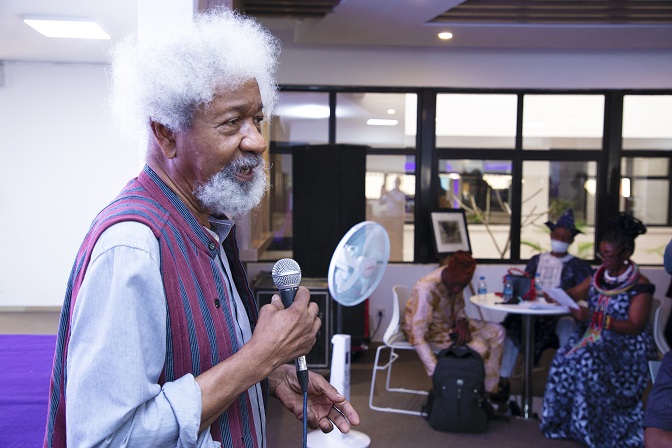 Nike is one of the most exceptional and unique artists I’ve ever met, not because she uses herself as her own model of expression, but because she’s a walking piece of art that spreads joy all around, it’s an honor to celebrate with you today aburo. It’s time for the world to get to know you and celebrate you”

“The best setting to discover a genius is in the informal educational setting rather than the academy.

In his opening remarks, the Vice Chairman of the CIG Group, Dr. Linus Idahosa spoke about the historic support the company has had for the creative industry; in his words “True Art is not just what stirs our sense of sight, attunes our soul or causes our spirit to rejoice; for us, it is the most powerful tool for societal change and Mama Nike has proven to be that symbol.

Mama Nike has trained a lot of people from the grassroots. On the other hand, she also looks after artists, her colleagues, and professors, giving them the means to continue. I would  like to thank Kofo Adeleke  for writing this book which reconstitutes a great document for Nigerian art.”

“Mama Nike”, as she is also fondly called, is a lady of many firsts; a true protofeminist. The living legend turned 69 on May 23 and is celebrated for her  Art, philanthropy, and strength of character. The protofeminist weathered many personal storms, from a young age and emerged to the top. Her work has exported Nigerian culture worldwide into prolific collections including- The Smithsonian, The Gallery of African Art, The British Library, in Londondale; amongst other high-profile homes including former US Vice President, Walter Mondale. She currently lectures at several universities in the United States, UK, and Canada- even without a University degree.

The third honorary speaker at the event, Jess Castellote observed: “I am delighted to be here, the art world is a complex system with several players, I just want to mention one person that has helped consistently for the past decades.  She has been very successful in that and I think we need to acknowledge that and support her. It’s not only that she has trained people, she works in the gallery and has helped many others. I’m really glad to be here. I’ll say thank you, Nike.”

This call to reconnect with our roots was further emphasized by the Chief Launcher, – business mogul-Chief Diana Chen. Being a lover of arts and culture, she expressed her affection for the blooming industries through crucial collaborations such as this.

Speaking at the event, she said: “We all know Nike Davies-Ogunlaye. We recognize her for her unending talents, her alluring gallery, and her impeccable style. We know about her, but hardly do we know her story. She has groomed thousands of talents throughout her life, but I believe that through her story, she’ll inspire millions more.”

The CEO of the Nigerian Stock Exchange, Oscar Onyema also honored the artist, he explained that Nike Art Gallery was the first stop when he first visited Nigeria in 2011. Mama Nike had spent two hours introducing him to Nigerian art:

” It gives me great honor to be here at this launch. As you know, finance is a great catalyst for growth in any sector. This convergence is a required ingredient for economic growth. I must congratulate Chief Dr. Nike Ekunda– who I fondly call Mama Nike and Kofo Adeleke, for this amazing book. Without doubt, Mama Nike,  your shoes not only made an impression now but likewise your name and your sectional works in exposing our nation’s rich culture and heritage,” Onyema remarked.

Chief Diana also sent a strong message to the Governments, private sectors, and citizens of Nigeria, on Celebrating our Heroes and Legends whilst alive. In the wake of this new movement, a pace has been set, by celebrating the life and biography of a daughter of the soil who has done the Nation proud Nationally and Internationally. Chief Diana continually emphasized the importance of chronicling the stories about our Legends and their impact on the younger generations of Nigerians who need Inspiration and Guidance for their lives and careers. She urged every Nigerian to place a copy of the book on their coffee tables; starting with herself. The Chief Diana Chen Foundation launched One Thousand books; with Five Hundred copies to be donated to Five Top Nigerian
Universities.

“It’s an honor to be here amongst the greatest artists on the planet, — Prof. Soyinka, Prof. Bruce, and many other artists present. I already call her Mama, because this is the feeling I get when I visit her gallery. I have visited many galleries around the world, but her gallery is a temple. When you leave Nike Art gallery it is like you are coming out of a dream.

I took my staff on a company outing to Nike Art Gallery. They are usually not familiar with the art, and I told them ‘In the beginning, art is like eating and sleeping.  It is part of the basic need of people. It is part of that which defines us. It is a mirror of our society. It is important,’ and I think they understand after the two hours we spent at the Nike Art Gallery. Also, congratulations on all your achievements. I thank you for inviting us. Thank you also, Chief Diana Chen. “

Famous for her arts, crafts, textile design, gallery, and unmistakable style, Nike has a career spanning five decades all compressed into over 233 pages of beautifully composed text. Yesterday’s Book launch event ended with the reading of a few chapters by the author, embellished with unmistakable style, as always.

It has been a roller-coaster journey for the woman also known as Nike Twins Seven-Seven. who has gone on to educate generations of artists, through a network of art centres across Nigeria at no cost. The memoir; “Bata Mi A Dun Ko ko Ka”   is available now, for N14,000 at BookCraft, its Publisher’s site, and at Mama Nike’s eponymous Art Gallery. 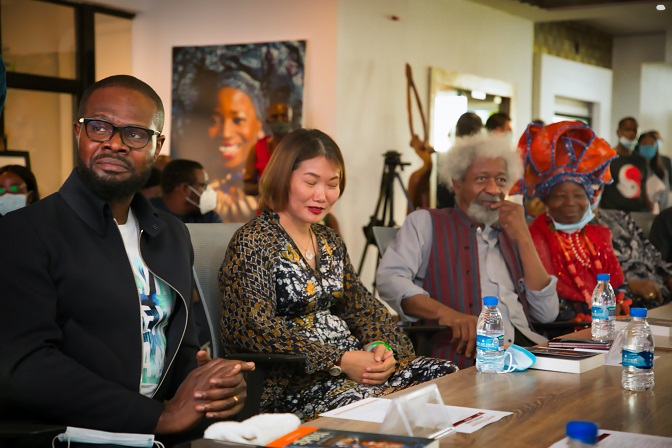 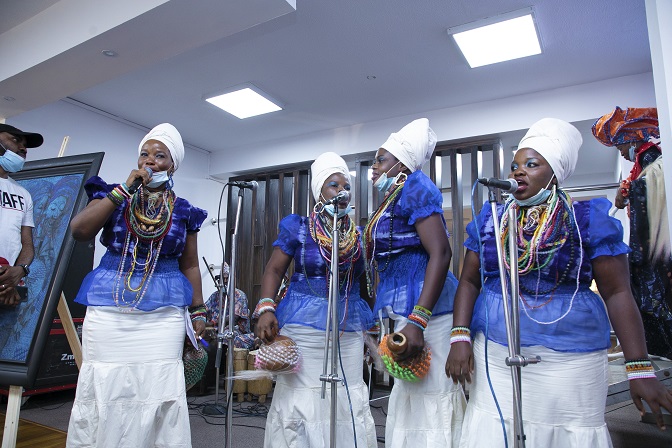 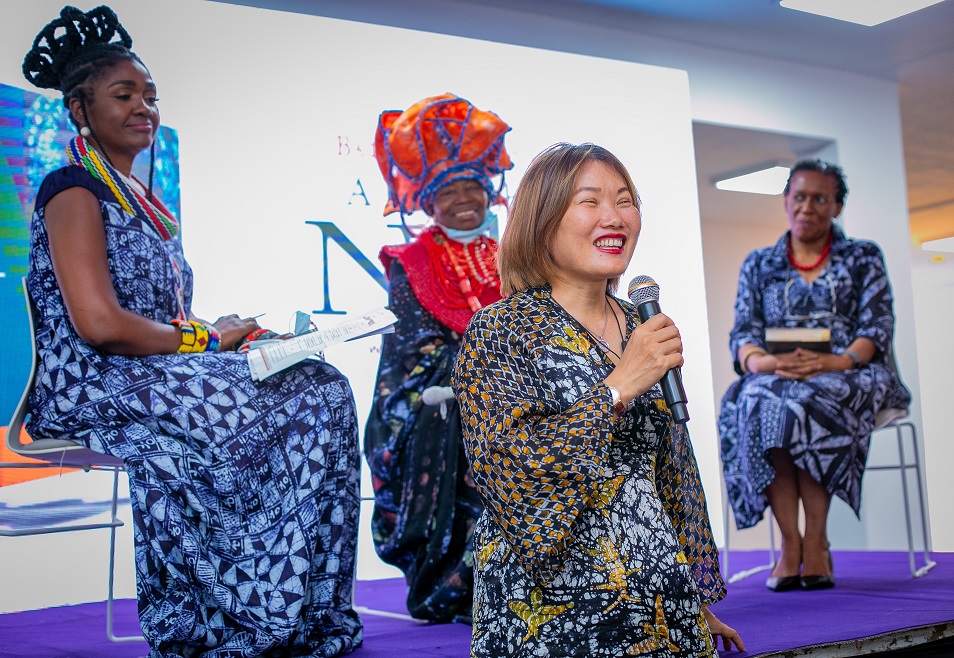 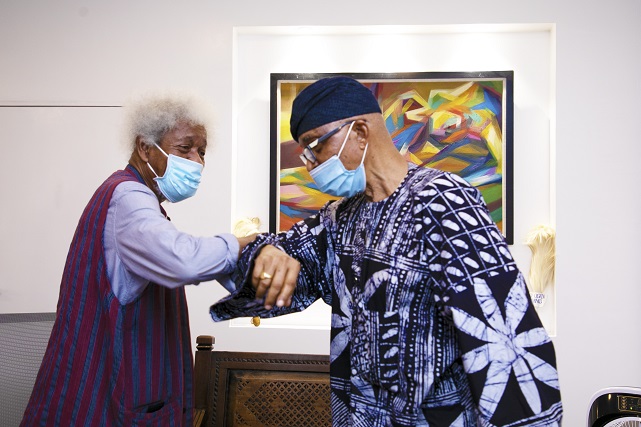 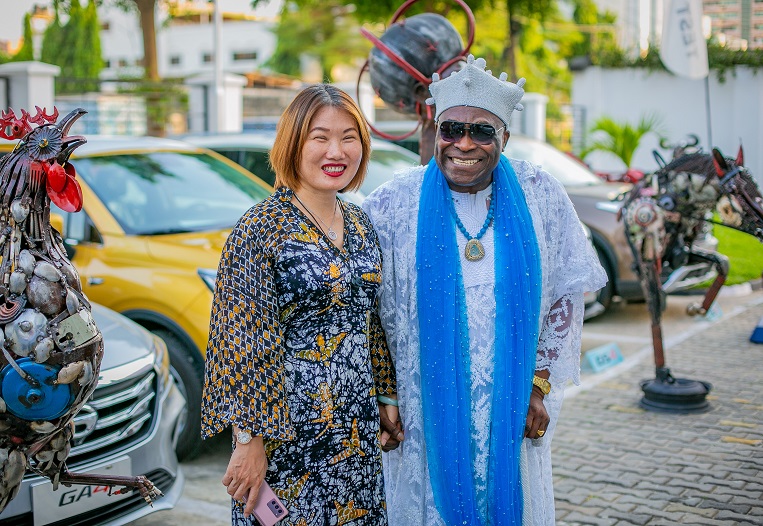 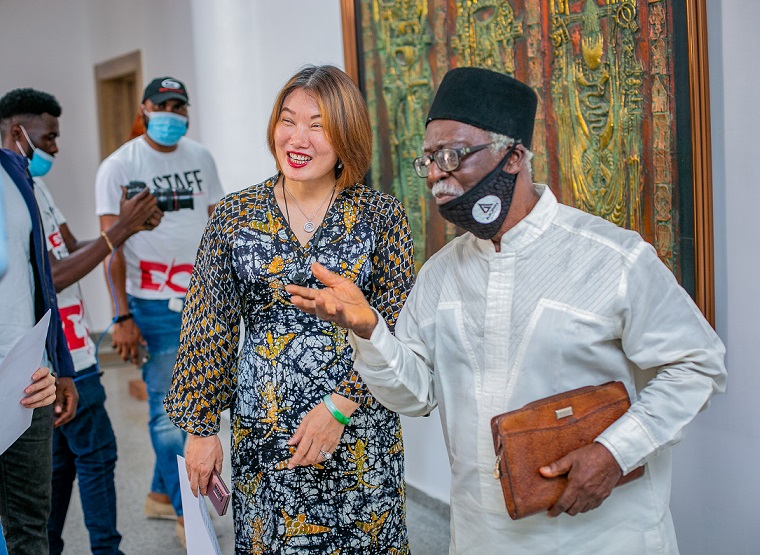 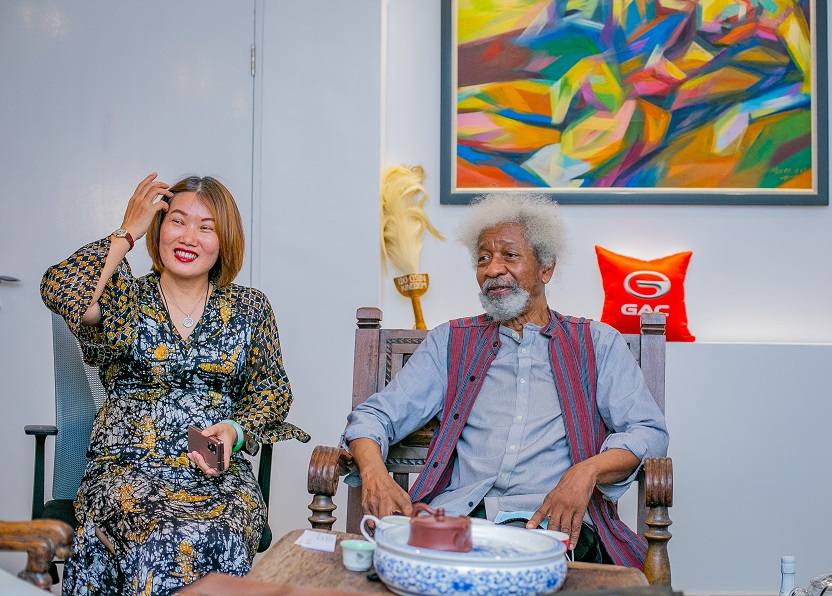