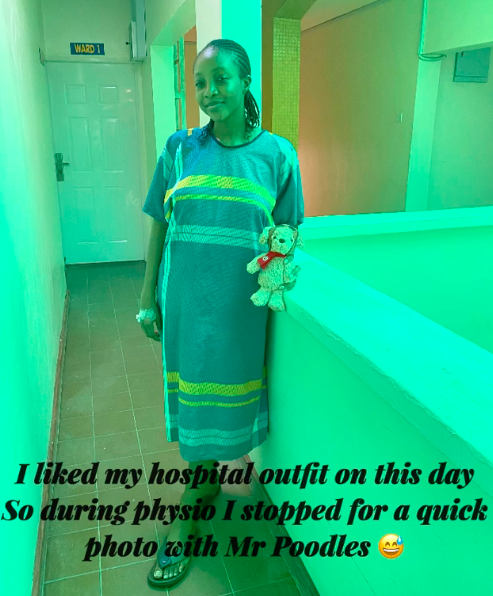 Ini Dima-Okojie opened up to her fans in a major way today as she shared the story of her long battle with fibroid.

We know a lot of women are living life with fibroid pains. It is always great when people speak out so kudos to the actress. Thankfully, she had a successful surgery and she’s doing much better.

Sharing her story, she wrote this:

My journey with FIBROIDS

Hey Guys, I know it’s been a minute!.
I want to share something quite personal with you… but I think it’s important.
Cos this is something that apparently affects about 6-8 in every 10 black women but no one talks about It.

I found out I had fibroids in 2017, I remember freaking out so much. The first gynecologist I saw said if it wasn’t really bordering me he would advice I leave it alone but that I had better go and quickly get married (🙄 no jokes)

Anyways, fast forward to March 2020, the bulge on my lower belly had gotten bigger & my new gynecologist advised I take out the fibroids. Then Covid happened and we had to put the surgery on hold.
In the mean time I tried other things… herbs, clean diet, exercise…

Now fast forward to November, the bulge in my tummy had now increased significantly so I decided to go do another pelvic scan & was told I had to get an MRI cos the fibroids were now bigger than what the ultrasound machine could adequately measure.
Bottom line I had to have the surgery as soon as possible.

I had the surgery, it was successful and I’m now healing slowly but surely.
I just want to thank God Almighty for showing up and showing out for me!!!!
I want to thank my family and friends especially my mum and my Aunty Biola who moved in to the hospital and never left my side. I want to thank Dr Esue & all the Drs & Nurses at Cedarcrest hospital for taking such good care of me.
And finally I want to thank you guys who have been sending me messages/Dms, wondering if I’m okay & praying for me anyway. 💞

To the women out there dealing with fibroids. I know what a lonely road it can be.. not to talk of the pain and discomfort and then there are the ignorant ‘congrats on your pregnancy’ comments to deal with 🙄
It’s okay they don’t know any better.
I want you to know that my Dms are opened to you. If you want to ask questions, talk or even just rant. (I’ll respond once I get stronger)