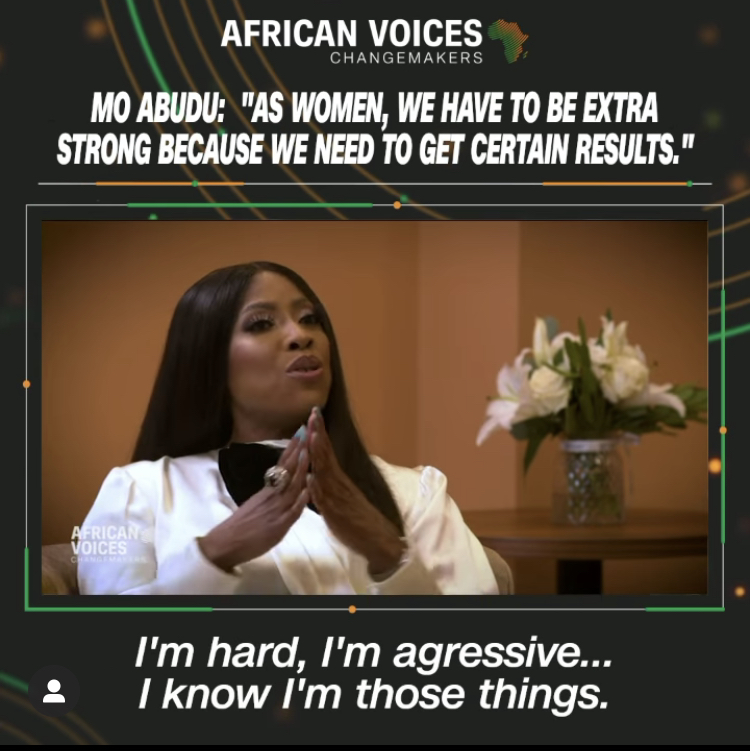 In this interview, award-winning media mogul and CEO Ebonylife Films, Mo Abudu shares her change-making journey and what she has coming next on CNN’s “African Voices Changemakers” show.

The show begins with an introduction from the filmmaker in which she says, “I just felt that it was important to build a platform that can tell our stories, that can show the world who we are for good and for bad. Things that it was necessary to have a conversation about. So for the longest time, I was living the dream and I can say that it’s been the most enjoyable part. I’ve always loved everything I’ve done but this is finally like the icing on the cake. I am expanding what’s possible in Africa’s media industry. I am Mo Abudu and I am a Changemakers.”

Talking about discrimination women face in the industry she says,

People call me all kinds of names. I’m tough, I’m a slave driver, I’m hard, I’m aggressive. I know I’m those things. But the thing is that a man that was doing what I was doing would never be called aggressive, or hard or slave driver. To do what we are doing as women, we have to be extra strong because we need to get certain results. As many of you have probably seen me and my grandson. I mean like, my grandson is my life. So it’s not that it’s not there to be mom and to be aunty. But I also have to be firm when I need to be firm and I’m not apologizing for that anymore. As women, you know we are dealing with so many levels of discrimination. You are in a male-dominated industry, you are a black woman, you are a woman, you are an African woman. I’m determined that none of these things are going to hold me back.

Here’s a snippet of the interview:

The post Mo Abudu shares her Changemaking Journey & what she has Coming Next on CNN’s “African Voices Changemakers” Show appeared first on BellaNaija – Showcasing Africa to the world. Read today!.