#OccupyLekkiTollgate: Here’s What’s Been Happening at the Lekki Toll Gate 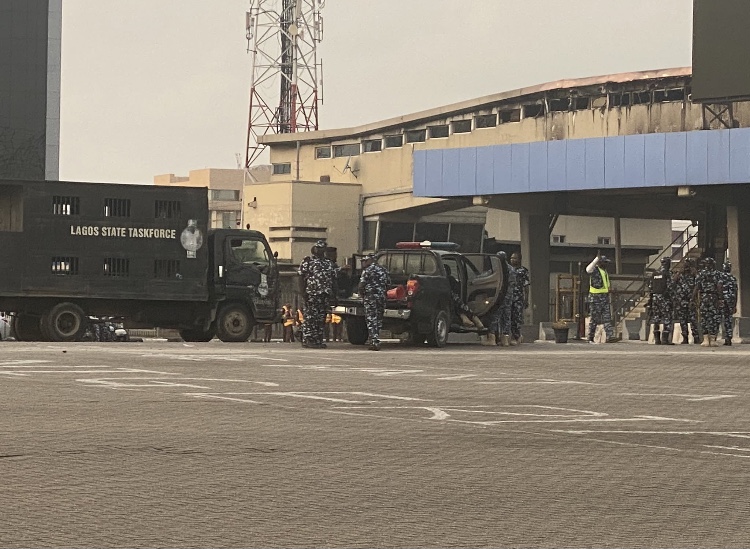 Recently, the members of the Lagos State Judicial Panel led by Justice Doris Okuwobi (rtd) ruled in favour of Lekki Concession Company, for the Lekki tollgate to be reopened. Following the news, Nigerians took to social media to express their disappointment in the decision of the Lagos State Judicial Panel. With an “Anti-Lekki Tolling Movement” tagged #OccupyLekkiTollgate, the youths fixed a peaceful protest at the Toll Gate to hold on the 13th of February.

On Friday evening, police officers were reported to have barricaded the Toll Gate to avoid any form of protests. This action did not stop the youths from keeping their words as they showed up in their numbers to carry on with the protests on Saturday. However, some of the youths who showed up at the Toll Gate have reportedly been arrested, including comedian and content creator Mr Macaroni who was also at the forefront of the #EndSARS protest.

Mr Macaroni made the incident known when he captured the happenings on his Instagram Live video session. In the video, the comedian along with other #OccupyLekkiTollGate protesters and innocent bystanders were seen in a Black Maria with which they were arrested. Several other videos also showing the youths being arrested have made rounds on social media.

Nigerians have since taken to social media to condemn the act and here’s what they had to say:

We were told the arrested protesters are being moved from Adeniji to the Area Command in Ikeja. Our lawyers are also there. #EndSARS

The Presence Of The Police Should Have Been The Main Reason The Protest Should Hold Peacefully. To Avoid Any Form Of Violence. instead They Brought The Very Violence They Should Be Protecting The People From. Forcefully Arresting Peaceful Protesters #EndSARS

Some Arrested Protesters Question Their Arrest By Police Officers#EndSARS pic.twitter.com/snxOE3lYOm

She deserves a million retweet. You are my Hero

The theme of the next #EndSARS protest will be “how many people una go arrest” The Nigerian government better call Sanwoolu to order. He is making a monster of Nigerian youths. This is a gross abuse of office. pic.twitter.com/6t5nMl2n1R

Govt at Federal and State levels know the rights of citizens in sections 39 and 40 of our Constitution.

They just do not care about those rights and have illegally criminalised peaceful protests.

We are fighting so many battles at the same time in Nigeria and we the people are at the bottom of them all. It’s honestly so sad! #EndSARS

I want to remind y’all again that the government hears you. They saw us talking about a protest & they reacted swiftly with “force”. So know that when we’re talking about all the broken systems in our nation, they’re listening, they just don’t care enough to respond #EndSARS

The Black Maria with which they arrested #OccupyLekkiTollGate protesters and innocent bystanders/commuters could not start.

Some uniformed men had to push it yet they’re screaming #DemNoBornDemPapaWell pic.twitter.com/C8hYSKwOJI

The post #OccupyLekkiTollgate: Here’s What’s Been Happening at the Lekki Toll Gate appeared first on BellaNaija – Showcasing Africa to the world. Read today!.