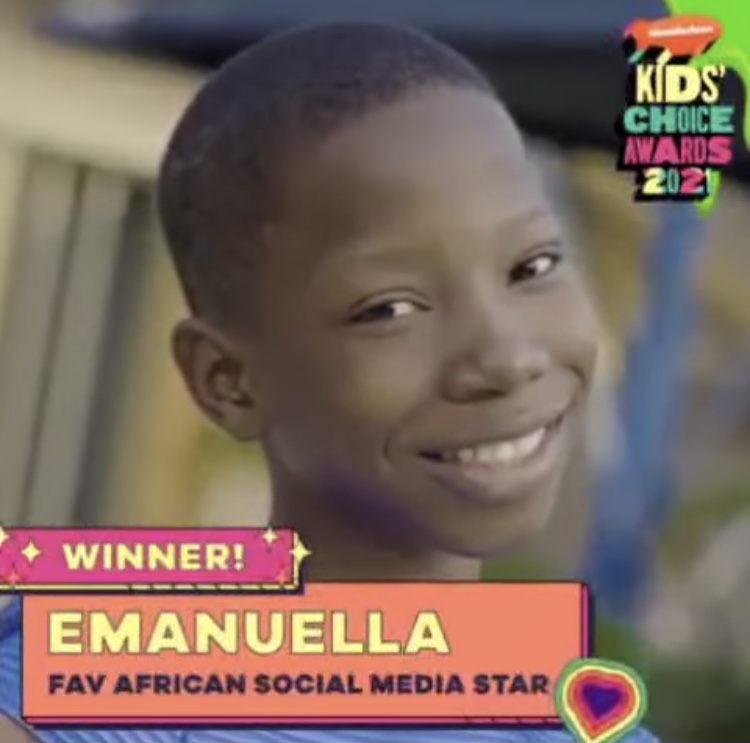 Nickelodeon’s Orange Blimp took fans on a virtual ride around the world and beyond at this year’s Nickelodeon’s Kids’ Choice Awards 2021 and Emanuella Samuel, Mo Salah and Vanessa Nakate others were winners at the 2021 Awards.

Uganda’s Vanessa Nakate also emerged as ‘Together for Good’ winner for her efforts in promoting climate justice pledged to “continue educating the society about the effects of climate change”.

Expressing her delight at receiving the Award, Emanuella said, “Congratulations to me as I won the Favourite African Social Media Star category at the Nickelodeon’s Kids’ Choice Awards 2021.

I am so happy to be a winner, thank you! To all my fans out there, [I say] thank you. To all those who voted for me, I love you so much, this win would not have been possible without you”. The young star also took the opportunity to urge viewers not to “forget to stay safe”. “Always stay at home and remember to clean your hands with alcohol-based hand sanitisers. We love you so much”, she added.

Commenting on his win, Mo Salah said “It is great to be nominated for the Nickelodeon Kids Choice Awards and it’s more amazing to have won the Favourite African Star Award, thank you, everyone, for voting for me and remember to stay safe.”

TOGETHER FOR GOOD (AFRICA)

FAVORITE VOICE FROM AN ANIMATED MOVIE