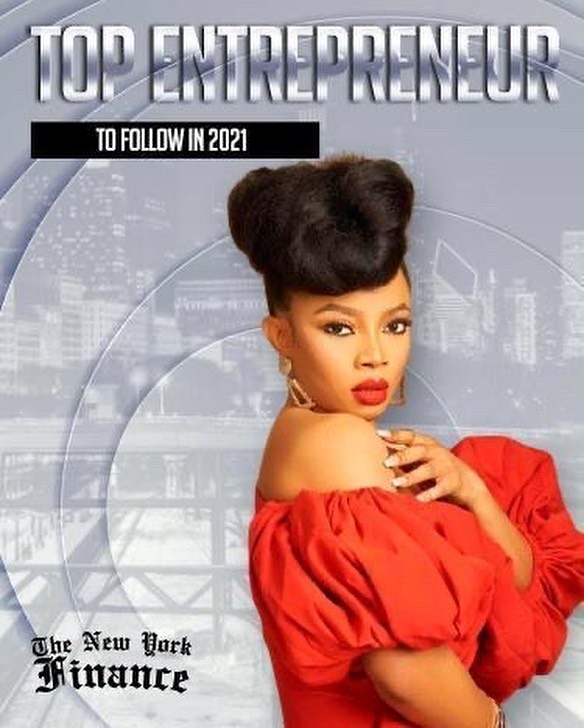 The New York Finance has released its list of Top Entrepreneurs VIP Media Group selected to follow in 2021 and on this list is Nigerian TV/radio personality, actor, brand influencer, entrepreneur and social media star Toke Makinwa.

Toke was listed among 9 global entrepreneurs like Grant Cardone, Tai Lopez, Hannah Roper, Vasyl Kostiuk, Mark Kohler, Nida Leardprasopsuk, John Despres, Lil G On The Track, and Megha Rao for being able to “grow their businesses, sustain and scale them, and are currently doing great things, even during this time.”

Feeling unfulfilled in her career in the banking industry, Toke Makinwa decided to take a leap of faith and begin her career in the media and business world. The Nigerian entrepreneur is now the owner of three different businesses as well as a media personality on TV, radio, and more. Her three businesses include: TM Luxury a leather goods company, TM Beauty, a beauty brand and The Toke Makinwa Brand, a lifestyle brand. Toke does so much because she didn’t want to be just another media personality; she wanted to do more for herself and others. This year, she is focusing on those businesses even more hoping to expand them throughout the rest of this year as well as working on pan-African collaborations.

The post Toke Makinwa is on The New York Finance’s List of “Top Entrepreneurs to Follow in 2021” appeared first on BellaNaija – Showcasing Africa to the world. Read today!.